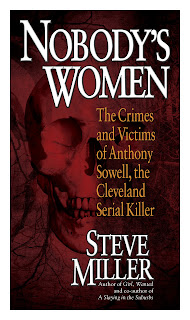 This is about a different kind of crime than I generally write about. This is about greed, which really seems more synonymous with music. See Appetite for Self Destruction. As I put the finishing touches on Nobody’s Women: The Crimes and Victims of Anthony Sowell, Cleveland Serial Killer, I sent a note to the Plain Dealer, the daily in that city with the largest circulation. I sought to reproduce a brief the paper ran on a meeting regarding a woman missing at the time, Michelle Mason. She was eventually to be determined to be a victim of Sowell, who was convicted last year in the murder of 11 women.
The item ran in the Plain Dealer on December 1, 2008 and read like this:
There will be a rally this evening for missing Michelle Mason.
Mason, 44, is ill and bipolar. Her family hasn’t heard from her since Oct. 8. They fear she is being held against her will, or worse, community activist Judy Martin said.
The family reported her missing on Oct. 12, Lt. Thomas Stacho said. Detectives are investigating.
Family, friends and activists will pass out fliers at 7:15 p.m. at East 116th Street and Buckeye Road.
Mason vanished after meeting a sexual predator who had served 18 years in prison for rape and stalking, her family said. Her two sons, mother and sister have been searching for her.
I sent a note to the Plain Dealer asking to run the item, called a permission. After 12 days, I received a note back from the point person on permissions.
“I can write up a contract for you on this. But I just want to let you know before I do that the usage fee for that content will be $480.”
$480 to run 107 words. I asked that they waive the fee.
“Steve, Thanks for your request, but we cannot waive the fee. Sincerely,
m—“
Yes, that was sincere.  This is how corporate newspapers, which have laid off thousands and have more fealty to the bottom line than to news, run the show now.
I paraphrased the item and sent it Penguin lawyers, who signed off on it. The book is slated to be released in October.