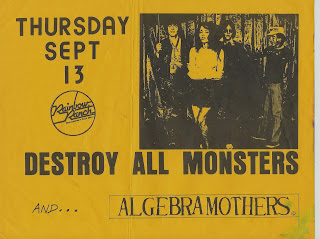 I’ve never uttered the term ‘back in the day,’ mostly because the past is always at hand and to infer that things were better before is a self-inflicted wound. These better be the best days, otherwise what’s the point?
That said, I sometimes forget how much I remember until asked. This column for Revueis hardly as reflective as it began, but it morphed into an ‘oh yea’ sort of thing. It was a cool idea that came from Rich Tupica, editor of the far superior Mid-Michigan version of Revue.
I’ve never quite forgotten the mediocre  Gun Club show at Bunches, with Ward Dotson and Rob Ritter, pre-Congo Powers. Probably because I saw the band put on two of the best shows I’ve ever seen in my life at Todd’s in Detroit in 1984 and 1988.  Two nights after that 1982 Gun Club show, the band had a show scheduled in Ann Arbor. Because it was something to do, I rode down there with Craig, a bandmate of mine in the Fix, and a few girls. On the way down, one of the girls mentioned that she had a wing ding with a couple of the guys in the Gun Club after the EL show.
“Well, you should get in free,” one of the others noted. Yes, I thought, and moochingly added, “can you get us in free, too?” I really didn’t do the heavy lifting in those days.  That’s one I hope to fix on the next go-round.
There was a lot I could have added to that Revue story. Sonic’s Rendezvous Band played two nights in 1979 at the Rainbow Ranch, which was a barn-shaped place across from Coral Gables. It was amazingly loud and rock-ish, hitting that sweet spot between guitar wanking and punk rock. Destroy All Monsters played there as well as many other places, always failing to achieve said sweet spot.
The Dickies played at Dooley’s as did the post-Gang War version of Johnny Thunders and the Heartbreakers. Walter Lure broke a half-pint of vodka in the urinal before hitting stage and Thunders literally fell down trying to do a rock acrobatic in front of the drum set.
The music that came to Lansing was better than I remembered, taking place mostly at Club Doobee and Bunches. I may have forgotten to mention the Fast at Doobee for good reason. The guys who handled bands there had to be spoon fed most things, often via our loud mouths. Having Dave handle booking at the latter ensured quality. Tav Falcoplayed there, I am recalling randomly just now. It was cool to check back on those memories that shaped a bunch of us and I’ll do it again. But it’s even better to wake up every day with a new set of past and present.
Previous PostCollege is Still Bad For You - But Just In Case Next PostNugent As Dumb As Any Beast He Kills