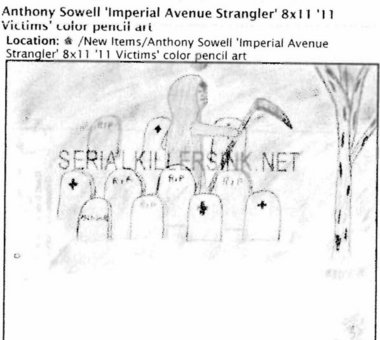 It’s never clear enough to folks that convicted criminals cannot profit on any proceeds connected to their crime. This story in Cleveland’s Plain Dealer, which I am now thinking has some of the best reporters in the U.S., notes some drawings of tombstones by Anthony Sowell that are available on a serial killer memorabilia site.
No big deal, really – I still have some serial killer trading cards – and these things appease the wishes of some twisted collectors.
The article notes how stupid it all is, but the serial killer has sadly been built up in our culture to some borderline heroic status.  There’s absolutely nothing interesting or charismatic about Sowell.  While John Wayne Gacy and Charles Manson achieve infamy, most killers, serial or not, are as bland as Sowell. Regardless, some people are  interested in things he touches. This isn’t the first time Sowell has appealed to collectors.
From the book, Nobody’s Women: The Crimes and Victims of Anthony Sowell, the Cleveland Serial Killer:

Anthony Sowell spent some time writing letters to a website devoted to selling serial killer memorabilia called Serial Killers Ink. One of his letters went up for sale for $200. He addressed the letter to employees at the California-based outfit. In another letter, he wrote, “I can only get money orders at this time and, yes, I can receive pictures.
On a Christmas card, he wrote to one admirer, “So if you need someone to talk to I am here for you. So tell me what do you want to know about me? I know what I want to know about you, what type of woman are you? Do you have a man in your life?”
Beneath his signature was the Bible verse Matthew 1:23: “Behold the Virgin shall be with child and bear a son and they shall call him Emmanuel, which means ‘God is with us.’”
Still another, to a California woman, read, “Thank you for sending me your support. I hope that you are doing well and in good health. I am in need of just about everything and anything you can do to help out is a blessing . . . never send cash in the mail, you can send me money orders. Just put my name and number on it and put it in with your next letter. OK, I’ve got to close now, I only get 20 min out.”
He signed it “Tony Sowell” and underneath, “Anthony Sowell.”
To a person named Barry, he wrote about his life in jail.
“They are treating me well here, I have my own cell and my own TV so it’s ok for now . . . I was married before, my ex-wife died in an industrial accident back in 1998 in California, her home state. We were married for about three years and had no kids.”
He signed off, “Your pal, Anthony Sowell.”
The letters sold for between $80 and $200.
[
Previous PostTen Minutes With Me Goes by Like Five: Q & A in Plain Dealer Next PostSpecial districts, special favors. An insider network of favors surrounds these proliferating governments in Texas