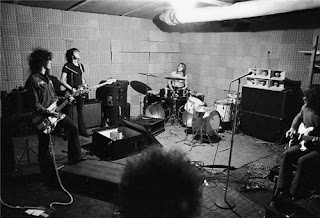 Hung out with John Sinclair last night and heard something I didn’t know – after the first MC5 lp, Kick Out The Jams, came out in February 1969, the fracas over the use of the word “motherfucker” was coming down all around them. Elektra, the label, backed out of its agreement to support the band even with the use of the word in there and Sinclair asked that the band be released. As that request was winding its way through the corporate ranks, the band hit the west coast in March and recorded three songs in a studio with Bruce Botnick, who had produced the first lp. “Human Being Lawnmower,” “Looking at You” and something that slips John’s mind are the songs.
“Where the fuck are these and how can we hear them?” were the words I used reactively. The idea of hearing those songs that were so tepidly produced by Jon Landau in late 1969 stimulates.
“We did those songs, and they say the tapes are lost, maybe in a fire or something, “ Sinclair told me.
What a tragedy.