As you’ve seen via almost every Michigan media outlet, Iggy Pop is lending his name to an effort to repeal a bill that permits limited wolf hunting in Michigan.
In a letter dated Nov. 12, Iggy asks Michigan Gov, Rick Snyder to halt the hunt that began last week and put the issue to a vote “allowing the people’s voices to be heard.” 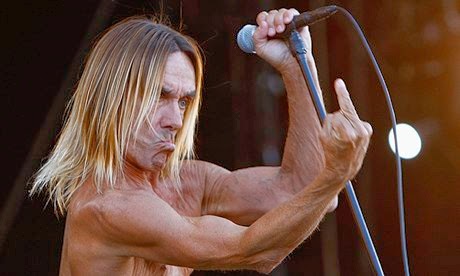 “As a Michigan native and someone who has cared about animals, both wild and domestic, for as long as I can remember, I was dismayed…that a bill you signed last May (S.B. 288/P.A. 21) gave Michigan’s Natural Resources Commission the authority to decide which animals can be hunted…which resulted in the first authorized wolf hunt since wolves underwent state protection in 1965,” Iggy writes.
“It is shameful the lengths the legislature and the executive branch will go to hunt this iconic creature while as the same time opening the door for other species to be hunted, like the Sandhill Crane. The legislature’s actions are nothing more than an attempt to shield their actions and take away the voters’ rights.”
There’s much more to the bill to hunt wolves than just an action to help a small segment of Michigan’s cattle farmers, primarily in a limited region of the Upper Peninsula.
First comes the revelation that many of the complaints about wolves have come from one loud farmer, who has done little on his own to mitigate.
Then there is the travesty of public records reporting. There are few states that rival Michigan for government secrecy in order to keep the public in the dark.
From a story in MLive about the public response to the wolf hunt:  The Natural Resources Commission received more than 10,000 emails after seeking public comment, but there is no tally of how many were pro or con. The NRC chairman deleted several thousand, many of them identical, from all over the world. Most of the rest went unopened, a department spokesman said. They said anti-hunt groups launched an email blast so extensive the agency was overwhelmed.
I’m not sure who would believe that dog-ate-my-homework excuse, but certainly no one with any common sense.
Gov. Snyder is appeasing powerful Republican state Sen.  Tom Casperson, who serves a wide swath of the UP, where GOP votes have been traditionally hard to get.
Casperson is now chair of the Transportation Committee and the Natural Resources, Environment and Great Lakes Committee. His campaign coffers, like so many, are amassed with cash from special interests.
Perhaps more important in the case of the wolf hunt, he has received $10,500 over the years from the Michigan Farm Bureau political action committee, one of the prime movers of the bill that allowed the hunt.
Most farmers donate to the PAC, and more are members of the bureau.  That’s a big voting block.
Casperson posted a press release in October citing wolf attacks on the livestock and pets of some of his constituents in October while berating the U.S. Humane Society.  Then Casperson cited a poll by a Republican polling group that claimed 67 percent of Michiganders supported a wolf hunt in targeted areas of the state, which includes his district.
Casperson is the same lawmaker who pushed through a bill allowing petting zoo patrons to touch captive bear cubs, explicitly and unashamedly citing Oswald’s Bear Ranch in Newberry, Michigan in a press release as enjoying the benefits of this measure.
Casperson is certainly for sale. Dean and Jewel Oswald, operators of the bear ranch, donated $1,000 each to his campaign fund in August, 2012.
Casperson introduced the bill regarding bear cub petting five months later, in January of this year. The Oswalds had also donated $500 to Casperson in 2010. The price goes up, apparently, according to what you seek. Senate bills must cost more.
As you can see, the wolf hunt is all about the cash and Republican Party fealty.
Iggy’s letter in support of the wolves is a terrific gesture, truly something he didn’t need to do. That speaks volumes. He writes the letter like a man who has read White Fang more than once.
Iggy could make a big difference down the line by funding and supporting candidates to take out such pay-to-play lackeys like Snyder and Casperson. Yes, they’ll be replaced by the same, but the revolving door at least has a small effect on honesty.
TAGendangered species Humane Society Iggy Pop Rick Snyder White Fang
Previous PostBob Bashara, the Book, Coming Soon Next PostThe Pursuit of the Tex Watson Tapes. Charles Manson Still on the Hook.

Iggy Pop talks about Jack White not recording the Stooges

The Stooges Were The Best Rock and Roll Band Ever