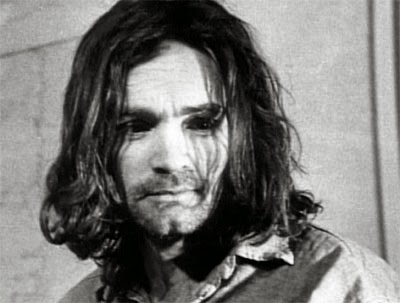 The new book on Charles Manson, Manson: The Life and Times of Charles Manson, is getting good reviews and strong word-of-mouth. It indicates there is still a lot of interest in the Manson case and crimes, perhaps more than had been considered before. The books are countless, some bad, some decent. The most well-known,  Helter Skelter, was a touristy, breathless exercise by prosecutor Vincent Bugliosi. But The Family by Ed Sanders is the test by which all Manson books should be judged.  I still check in with it a couple times a year. For completist readers of the Manson legend, though, here are five lesser-known books that will give your reading on the man a bit more depth.
Desert Shadows: A True Story of the Charles Manson Family in Death Valley by Bob Murphy (Sagebrush Press, 1993) Murphy is a former superintendant of Death Valley National Park and delivers a well-told book on the Family’s move to Death Valley after the murders, including the best account yet the arrest of several members, including Manson, at Barker Ranch in a remote part of the park.
Charles Manson: Music Mayhem Murder by Tommy Udo (Sanctuary, 2002) The factual errors are minor irritants when you look to this as the best tome yet on Manson’s connection to the Topanga Canyon music world in the late 60s. It’s also a solid primer on the relationship between Manson and Bobby Beausoleil, a skilled musician who did the soundtrack for Kenneth Anger’s movie, Lucifer Rising, after Jimmy Page flaked.  Includes both a discography and some lyrics.
The Garbage People: The Trip to Helter-Skelter and Beyond With Charlie Manson and the Family by John Gilmore and Ron Kenner (Omega Press, 1971) Re-released in 2000 as Manson: The Unholy Trail of Charlie and the Family, Gilmore interviewed Manson and other family members a number of times in 1969 and it shows in this thorough account. It’s an abbreviated walk through Family land, with details that most authors have missed. Photo section includes morgue shots that you’ve likely seen before but remain a little unsettling.
The Shadow over Santa Susana: Black Magic, Mind Control and the Manson Family Mythos by Adam Gorightly (Creation, 2009) Takes on the religious and, well, spiritual side of the Family, including explorations of connection to the Process Church of the Final Judgment and Scientology.  Shadowis the best exploration of mind control and conspiracies around the murderous ways of Manson.
Will You Die For Me? The Man Who Killed For Charles Manson Tells His Own Story, Tex Watson as told to Chaplain Ray (Fleming H. Revell Company, 1978) Watson was the hatchet man on the Big Night at Cielo Drive. He got religion pretty quick after being sentenced to death in late 1971, and while this book reflects Watson’s conversion, it’s also a brutal account of life in the Family, including a first person step-by-step of the murder at the Cielo house.
TAGCharles Manson Cielo Drive Death Valley Ed Snaders Helter Skelter Sharon Tate The Family true crime
Previous PostJudge Rules Against Black Flag Founder Ginn - Hot Topic and Urban Outfitter Rejoice Next PostInterview: The Saga of Sarah Pender on Investigation Discovery

Prison: “Everyone thinks of escaping; they just won’t admit it”