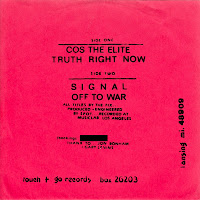 My mom turns 91 on June 10. As she will tell you, it’s not recommended to get this old.  She makes due. But on Saturday night, she called me around 11:30 and asks if I just called her.  She’s up until 2 or 3 on most nights, watching old movies, reading the Wall Street Journal or some Michael Connelly book. Not unheard of for her to call at any hour except morning.
“Did you just call me and ask me about the Fix?” she asks. Of course not, I said.
The deal is that she got a call from someone in Winnipeg, Manitoba, inquiring about the Fix. See, in 1981, when we put together the sleeve for Jan’s Rooms, the second 7-inch for Touch and Go, I had the bright idea of putting a contact number on there in case our fans, which numbered in the dozens, wanted to reach us. None of us were stable enough to have a steady phone number, so I put my parent’s number on there. Who would think anyone would ever call us? It only took 30 years.
So on the night of June 2, 2012, a punk rock kid called.
“Is this the Fix?” he asked my mother.
“No, who is this?” she said.
“Steve,” is all she could recall. She heard a good party going on in the background. Music, girls and boys laughing.
He explained the number was on the record and he just wanted to see if the number was any good at this point.
“Who is this?” the caller asked my mom.
“This is his sister,” my mom said. She may be 91 but she sounds  – and looks – much younger.
More music, laughter. The caller was polite and cool about it.  He thanked her and said good-bye.
“It sounds like you’re having a nice party tonight,” my mom said kindly.
I remember reading about Richard Hell telling his mom what he did and she was cool about the whole idea of him being an artist.
This couldn’t be further from that – I’m certainly no artist although I admire any expression of brute force and passion.  There’s no word for that. But that’s all the Fix were. My mom doesn’t need to get that. But she’s sharp enough to bluff out some drunk, well meaning and righteously curious kid north of the border into thinking I have a sister.
Previous PostWoodshock – People Still Pay Hundreds of $$ to Hang Out in the Mud Next PostThe Manson Family Story Via Tex Watson Exists - I Need a Copy of These Tapes